Only at a 3-minute sail away, the only isle of lake Maggiore in Lombardy’s territory (ISULIN for the inhabitants of Angera); approaching the little sandy beach for a swim or a visit is only allowed from the southern side.

On the isolino Partegora there is St. Arialdo’s tomb, founding cleric of the movement called “Pataria”, “he was barbarically slaughtered in 1066 AD by the “LUPO” (WOLF – the bishop of Velate) and by the “VOLPE” (FOX – Olivia de Vavassori, his concubine).

Near the isolino, on the western side, attention must be paid to the submerged wandering boulder “Sass Margunee“, so called because when it surfaces it is a sign of drought and hence of scarce harvest of “margun” (corn) – “When you see me, you will cry”, this was engraved on it by a fisherman (see Legend of the Sass Margunee).

The isolino Partegora, mentioned also by Italo Calvino in the Italian Fairytales, is better known for an important scientific discovery: here in 1776 Alessandro Volta, rummaging through the swamp north of the island, noticed some bubbles of gas coming out through the mud and, after various experiments, he succeeded in causing it to combust. He called it “the inflammable air”, today methane.

From the non navigable side, the little gulf of the Oasis of the Bruschera, a protected area boasting about 250 hectares of land is one of the last examples of flooded forest in Lombardy.

Through a network of dirt paths immersed in the indigenous vegetation it is possible to reach the heart of the place where it is not rare to spot turtles and fresh water bugs, the heron, the kingfisher, the great crested grebe, the wild duck and other migratory and non-migratory species – pay attention to wild boars.

Looking north, one cannot miss the Rocca di Angera, a fortress where it is possible to visit its historical rooms and the biggest toy museum in Europe.

Opposite Angera, in the town of Arona, the statue of San Carlo (St. Charles), a colossus of about 35 m from which it is possible to enjoy the view of the surrounds by climbing the spiral stairs and the steep ladder inside the statue.

At about 25 minutes sail, perched on a rocky cliff a sheer drop over the lake, the hermitage of Santa Caterina del Sasso dating back to the XII century – Mess is celebrated every Sunday at 4.30pm.

35 minutes away, the Borromeo Islands; 1 hour away, on the Piedmont shore, the Cannero Castles which were built between the XI and the XII century and, towards the end of the XIV century, were inhabited by the Mazzarditi brothers, legendarily responsible for piracy raids on the whole lake. 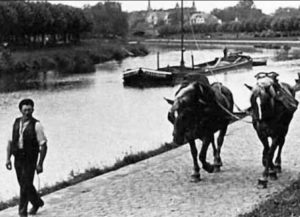 Il Motto della forca (The Motto of the gallow) is thus called because it is said that in the XIX and XX centuries bandits were hanged in this area when caught assaulting wayfarers on the Ducal road nearby., animal-drawn railway, substitute of sail transport wanted by Carlo Cattaneo.

In those years (1858) in the vicinity there operated the “ipposidra”

The goods arrived in Sesto Calende after lazy sailing, then it was loaded on boats suited to navigate the Ticino river and divided in:

CAGNONI 24 x 4.76 m equipped with covered cabin, with a payload of Kg 34,000 and 0.78 draft; BORCHIELLI or borcielli 24 x 4.30 m, with a payload of Kg 30,000; CORMANE and COURIER BOATS, smaller and with a capacity for 60 people and for small goods; and CAVAROLI, utilised to carry back to Milan, Pavia and Pontelagoscuro the horses and the cabin boys who had dragged the boats against the current.

The boats, entrusted in Sesto by the merchant to a guide called “parone”, were taken to Tornavento along the rapids or “ramme” of the Ticino river: the Miorina, the Legurat, the Lanca, the Cavalazza, the Ramm, the Asnino and the Panperduto; then, leaving the spur to the right, the journey continued along the Naviglio, on the left towards the “Bocca di Pavia”.

The exciting descent from Sesto to Tornavento lasts 90 minutes, reaching 20 miles p/hr on the rapids; between 7 hours and 1 day from Sesto C. to Pavia; 5 days from Pavia to Pontelagoscuro; 25 days to return with a small load and the help of horses and cabin boys who at times moved onto the opposite bank to maximize dragging.

From Pavia to lake Maggiore about 30 days with paired boats and a small load. Before the construction of the “alzaia” in 1824-44, in order to return 15 days, 25 horses and as many cabin boys were necessary – afterwards, only 3 days and half the horses. Sesto – Milano – Sesto in 12 days, of which more than half to go up the rapids – here the idea to realise a railway between Tornavento and Sesto to tow the boats.

The boats, taken ashore in Tornavento, were loaded onto big 8-wheeled railway-like carts and drawn by horses on a railroad until Sesto C. In case of scarce water, the boats were made lighter, and traffic was suspended during floods. The annual number of boats at work was 5,000 cagnone, 1,400 burchielli and 400 smaller boats.

In case of sinking, the “parone” takes a report drafted by the closest local authority officially confirming the accident, for which he is not responsible for compensation.

The expected number of horses was about 120 and about 120 men – the annual turnover was Austrian Lire 365,000 (over half a million Euros today).

The regular transport allowed for the economic development of the area, making it attractive also to wrongdoers; unfortunately for them, they ended their days at the Motto della forca.